In general, a Clutch Type LSD has pressure rings and friction plates inside the differential case. The LSD acts as a standard differential when a car is moving straight or the rotational difference between left and right wheels are similar. Once there is a rotational difference among wheels, the cross axis, which is set in the middle, will press the pressure rings, then the pressure rings will transfer the movement to the clutch plates. When all the clutch plates are engaged, both wheels are locked, and the torque is transferred equally to both wheels. 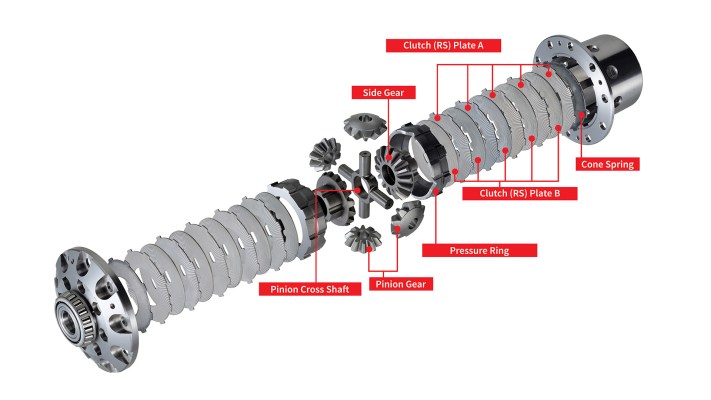 The 1.5-way differential provides full LSD action on acceleration and reduced LSD action on deceleration assisting braking stability and smoother turn in on cornering. Increased stability and less oversteer when cornering makes it an ideal choice for street use applications. The 1.5- way LSD suits motorsport making for the ultimate in traction in many road racing with increased stability.

The 2.0way differential provides equal LSD action characteristics under both acceleration and deceleration. The 2.0- way LSD suits motorsport applications such as drifting where increased oversteer is required. Since drifting requires a near on or off full locking of the differential, a high preload, high ramp response, max clutch pack arrangement will generally deliver the best results.

A 2.0-way KAAZ LSD configuration is not typical for street use, but it can be successfully used with correct clutch plate tuning and where much built-in understeer in suspension design is incorporated. 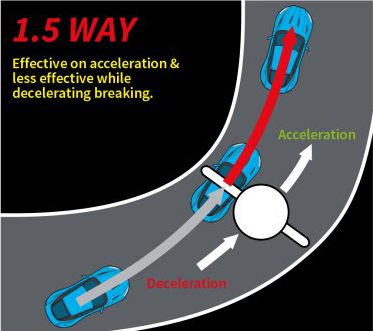 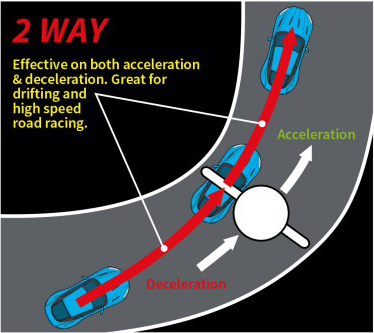 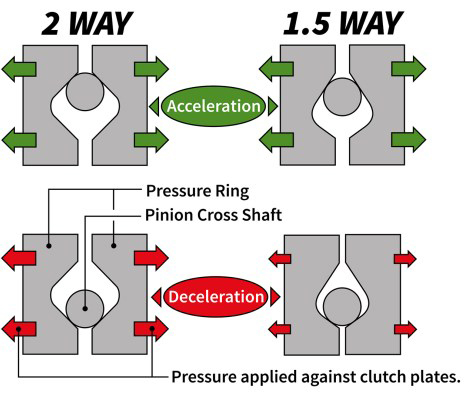 The blue arrows represent the force being applied to the clutch discs during throttle input. A 1.5- and 2.0-way LSD will all have the same behavior when throttle is applied, as long as the cam angle, preload and clutch arrangement is the same. When throttle and torque input into the differential is light, the applied force on the clutch packs is light. Heavy throttle input increase the force and the amount of slip.

This is where having a 1.5- or 2.0-way LSD makes a difference. When there is no throttle input and the vehicle is decelerating thanks to engine braking (not vehicle braking), a 2.0-LSD has the same cam angle for accel and decel and as a result it will deliver the same amount of slip limiting based on the torque input. A 1.5-way uses different cam angles to add less locking on dece!